This repository is an overview of what you need to learn penetration testing and a collection of hacking tools, resources and references to practice ethical hacking. Most of the tools are UNIX compatible, free and open source.

What is penetration testing?

Penetration testing is a type of security testing that is used to test the security of an application. It is conducted to find a security risk which might be present in a system.

If a system is not secure, then an attacker may be able to disrupt or take unauthorized control of that system. A security risk is normally an accidental error that occurs while developing and implementing software. For example, configuration errors, design errors, and software bugs, etc. Learn more

Want to become a penetration tester?

Knowing about risks on the internet and how they can be prevented is very useful, especially as a developer. Web hacking and penetration testing is the v2.0 of self-defense! But is knowing about tools and how to use them really all you need to become a pen tester? Surely not. A real penetration tester must be able to proceed rigorously and detect the weaknesses of an application. They must be able to identify the technology behind and test every single door that might be open to hackers.

This repository aims first to establish a reflection method on penetration testing and explain how to proceed to secure an application. And secondly, to regroup all kind of tools or resources pen testers need. Be sure to know basics of programming languages and internet security before learning pen testing.

Also, this is important to inform yourself about the law and what you are allowed to do or not. According to your country, the computer laws are not the same. First, check laws about privacy and surveillance: Nine eyes countries, Five eyes and Fourteen Eyes. Always check if what you’re doing is legal. Even when it’s not offensive, information gathering can also be illegal!

Infosec: Information security, which is the practice of preventing unauthorized access, use, disclosure, disruption, modification, inspection, recording or destruction of information. The information or data may take any form, e.g. electronic or physical. Infosec can also be a person who practices ethical security. Wikipedia

Opsec: Operations security, which is a process that identifies critical information to determine if friendly actions can be observed by enemy intelligence, determines if information obtained by adversaries could be interpreted to be useful to them, and then executes selected measures that eliminate or reduce adversary exploitation of friendly critical information. Wikipedia

Black/grey/white hat hacker: Someone who uses bugs or exploits to break into systems or applications. The goal and the method differs depending if they’re a black, grey or white hat hacker. A black hat is just someone malicious that does not wait permission to break into a system or application. A white hat is usually a security researcher who practice ethical hacking. A grey hat is just in the middle of these two kind of hackers, they might want to be malicious if it can be benefit (data breach, money, whistleblowing …).

Red team: According to Wikipedia, a red team or the red team is an independent group that challenges an organization to improve its effectiveness by assuming an adversarial role or point of view. It is particularly effective in organizations with strong cultures and fixed ways of approaching problems. The United States intelligence community (military and civilian) has red teams that explore alternative futures and write articles as if they were foreign world leaders. Little formal doctrine or publications about Red Teaming in the military exist. In infosec exercises, Red teamers are playing the role of attackers. Wikipedia

Blue team: A blue team is a group of individuals who perform an analysis of information systems to ensure security, identify security flaws, verify the effectiveness of each security measure, and to make certain all security measures will continue to be effective after implementation. As a result, blue teams were developed to design defensive measures against red team activities. In infosec exercises, Blue teamers are playing the role of defenders. Wikipedia

Security researcher: Someone who practices pen testing and browses the web to find phishing/fake websites, infected servers, bugs or vulnerabilities. They can work for a company as a security consultant and are most likely a Blue teamer.

Social engineering: In the context of information security, it refers to psychological manipulation of people into performing actions or divulging confidential information. A type of confidence trick for the purpose of information gathering, fraud, or system access, it differs from a traditional “con” in that it is often one of many steps in a more complex fraud scheme. The term “social engineering” as an act of psychological manipulation of a human, is also associated with the social sciences, but its usage has caught on among computer and information security professionals. Wikipedia

Threat analyst: A threat hunter, also called a cybersecurity threat analyst, is a security professional or managed service provider (MSP) that proactively uses manual or machine-assisted techniques to detect security incidents that may elude the grasp of automated systems. Threat hunters aim to uncover incidents that an enterprise would otherwise not find out about, providing chief information security officers (CISOs) and chief information officers (CIOs) with an additional line of defense against advanced persistent threats (APTs). SearchCIO

Difference between hacking and ethical hacking

Learning programming is the very first way to start learning about security. There’s a lot of languages, most people start with Python, it’s the easiest and the most popular one. PHP and Go are the less popular to write security-related stuff, but any of these can still be used in such context. Bash and Powershell are mostly about scripting and writing simple CLI applications.

Since not all languages work the same way, you need to look at how they work and what you want to learn. For example, C++ and Java compile, PHP and Python do not, they are interpreted languages. This definitely changes what you should use them for. Each language also has its own design patterns. 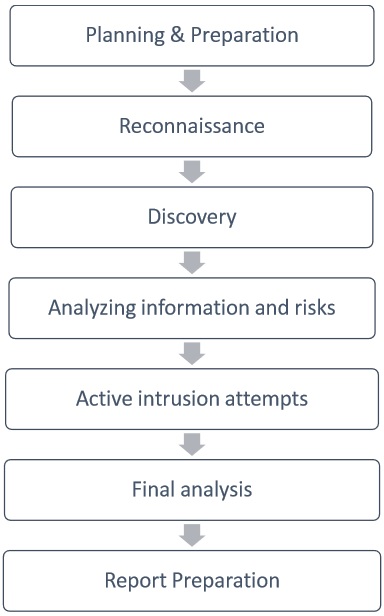 Information Gathering tools allows you to collect host metadata about services and users. Check informations about a domain, IP address, phone number or an email address.

Listen to network traffic or fake a network entity.

Frameworks are packs of pen testing tools with custom shell navigation and documentation.

Warning : I haven’t read them all so do not consider I am recommending as I liked them. They just seem to provide useful resources.

This repository is under MIT license.